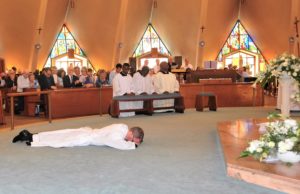 OG Mike Stonier (class of 1966) was one of nearly 800 guests who attended an Ordination Ceremony at the end of last year.  Mike’s son, Richard, was that day ordained a Diocesan Priest at St Charles’ Church in Johannesburg by Bishop Duncan Tsoke of the Archdiocese of Johannesburg.

There were 21 priests concelebrating of whom Fr Matthew Charlesworth SJ was one, and OG Dyncan Hyam (class of 1963) was the choirmaster.

Fr Richard trained at Sedes Sapientia Seminary in Rome at the behest of the Archdiocese and graduated from Santa Croce University.  His first posting was as Assistant Priest at Johannesburg’s Florida Parish, doing pastoral work, and at some stage, he will return to Rome to obtain his licentiate in Canon Law.