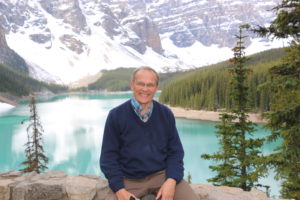 Each year, a wide range of extraordinary people across the United Kingdom are recognised for their achievements in numerous and varied fields.

This year was no exception, when the work of one unassuming Old Georgian was acknowledged through inclusion in the 2020 Queen’s New Year’s Honours’ List.

OG Brian Gardner (class of 1966) was awarded an MBE, becoming a Member of the Most Excellent Order of the British Empire. His award recognised “contributions to the arts and sciences, work with charitable and welfare organisations, and public service outside the civil service”.

Hs citation read “Brian Patrick Gardner, formerly Member of British Association of Spinal Cord Specialists, for services to People affected by Spinal Cord Injuries”.  We as a College are immensely proud of Brian, but his award was tinged with great sadness, because he was informed of the award before passing away in late 2019.  His achievement makes him one of a small handful of OGs to have been included in this elite group of recipients.

Brian was one of the world’s leading experts on spinal cord injury.  During his 30+ year career working in the NHS (British National Health Service), he was a Consultant at the National Spinal Injury Centre at Stoke Mandeville, held the post of Clinical Director, and travelled extensively teaching others about spinal cord injuries.  He devoted his career to supporting people affected by such injuries and rehabilitating those who had been paralysed because of them.

He also worked as a medico-legal expert and was involved in some landmark cases.  One such court case became law, when those with life-altering injuries suffered even greater impact because of prevailing secondary events.  Brian’s counsel and advice ultimately changed the way compensation is calculated in such instances.

Brian was the middle child in a family of five siblings, and formed a strong bond with his brother, John.  When it was time for Brian to go to school, St George’s was chosen principally because his father had a life-long connection to the Jesuits.  But he then left mid-way when the family returned to UK, and enrolled at Beaumont College.

After school, Brian took a gap year in a mission post in Guyana, and during his surgical training, he worked in the Kidney and Liver Unit at Addenbrooke’s Hospital.  This later influenced his decision to change courses from chemistry to medicine after he started university at Queen’s College, Oxford.

He and his wife, Stephanie, met in 1979 and they went on to have nine children and one foster daughter between them.  Their first child is a clinical psychologist, another is a doctor training to be a histopathologist, while the rest work either in creative or caring professions.

Brian was always a strong and committed Catholic who regularly assisted in his parish, improving communication throughout the local churches, as well as assisting with diocesan developmental work.