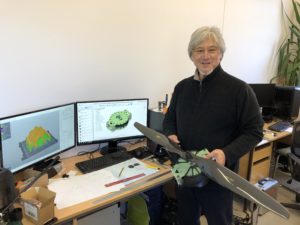 “I’ve been researching sensors and intelligent embedded systems since university within the framework of medical devices and later became interested in novel actuators,” he said.  “This work is a spin-off of my other company, which deals with medical devices and electric vehicle charging.  Everything comes together neatly in robotics, especially where robots imitate human activity.”

His company’s Sky Transport Autonomous Robot (STAR) project was launched just over a year ago.  Its aim is to use drones in aerial parcel logistics and looks at three test cases: delivering blood and pathology between hospitals on the Isle of Wight and Southampton in the UK, and between shipping needs in and around Greek islands.  The third case is aimed at alleviating traffic congestion in Lagos, Nigeria, by moving more freight by drones.  reason

“Drones are good at transporting items where normal methods fail,” said Dennis.  “Poor road infrastructure, waterways, regional disasters and war are some of the motivators behind drone usage.”

He began working in the UK defence industry, then left to forge his own path, but still kept a foot in academia mentoring PhD students while working as a senior research scientist in a Swiss computer systems’ department. “I moved this part-time position to another company where the focus of my research is on innovative medical devices, and I still commute to Switzerland each month but have a carbon footprint Greta Thunberg would really disapprove of!”