Home >Alumni>THROWBACK THURSDAY – A Lady in 1998 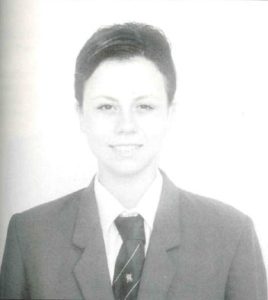 Over the years, numerous Convent scholars trekked across to the College for A-Level classes, but they were only visitors, unlike Vera.  Her presence inevitably caused some chaos and excitement and while she expected some special treatment – even attempting senior cross country – she soon realised that blending in was the best option.

Next year will be another historic year when more than 20 ladies enter St George’s College as full-time seniors beginning Lower 6.  And while many things will remain as they’ve always been, changes will inevitably occur: uniforms will have been modified to include skirts, stockings and court shoes, and academically, there’ll be an increase in arts and commercial subjects compared to previous all-male intake years.  Pupils and staff have also been educated about interacting with female counterparts – many of whom have never experienced this before.

The admission of ladies will certainly create new dimensions and a different atmosphere which are positive and exciting developments in the College’s history, reflecting life outside St George’s walls.