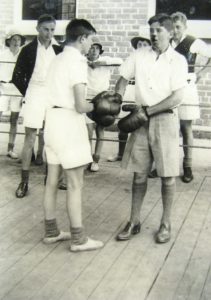 Boxing was one of the earliest sports at the College, possibly because it was viewed as ‘manly’ and came about during a particularly militaristic age in the country’s development. 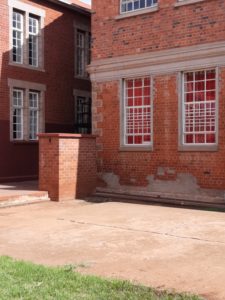 Boxing in the early years was part of the inter-schools’ cadets’ competitions and boxers were generally coached by military personnel on attachment. As you probably know, cadets in this country started at St George’s Public School in 1898 and the College was always an enthusiastic participant in cadet and related sports’ encounters. 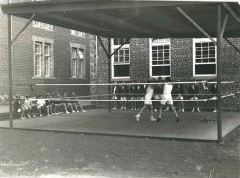 It was because of this that boxing continued well into the 1950s but the numerous injuries inflicted on unsuspecting pugilists may have been a contributory factor in the sport eventually being phased out altogether.

Today, all that remains of the School’s boxing is a slab of concrete (taken from approximately the same angle as the previous photo), and distant memories. Loyola Hall (formerly the Study Place) is whose windows you can see on the left hand side.

(Acknowledgement: Men For Others)