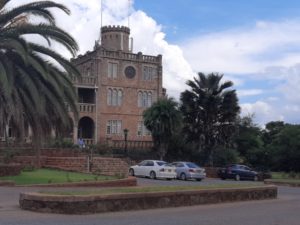 OG Godfrey Lawrence (class of 1949) was an affable, slim 6 foot 6 pupil at College.  He was a gifted sportsman and was awarded School colours for rugby, cricket and swimming.  His reputation as a magnificent cricket bowler ensured he had impressive stats, particularly when he played at national level.  70 years after leaving St George’s he remains – almost certainly – the only Old Georgian Springbok player, ever.  Yet his first love was swimming.

“My swimming teacher was Fr Cockett from 1943 to 1949, under whose coaching I obtained six firsts, at freestyle, backstroke, breaststroke, and Open events, with six seconds, and two thirds.  But my most memorable moment was the Under 12 backstroke width race in which I set a record on 6th March 1943.  I didn’t win because I was really any good but because I’d learnt how to do backstroke a few weeks prior, and during the race I genuinely thought I was going to sink and drown so I thrashed away as fast and as hard as I could to avoid drowning!” 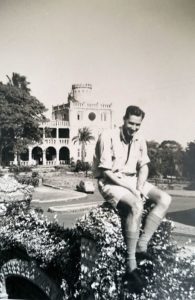 All OGs will know of “Goofy’s Grave” – or as it’s often known as nowadays, Long Island.  The area has always been a meeting place for hundreds of students over the years and was so in Godfrey’s time, too.  Goofy’s Grave was named after its namesake, “Goofy” as Godfrey’s still known as today because of its long and slim shape.

After leaving School, Godfrey became an engineer with the Posts and Telegraphs, then settled in South Africa, working for Amalgamated Packaging, before joining NCR.  His second of four sons, David, was named David Landreth after Fr Landreth, who was Godfrey’s cricket coach and spiritual director, for whom he had the highest regard. 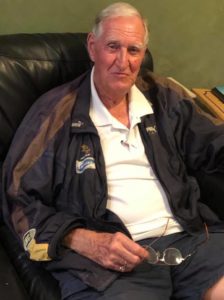 Goofy can be seen on the wall of the College’s original swimming pool in about 1948.  Although this area now houses a Lecture Theatre and labs, the same gate stands proudly at the entrance to the existing swimming pool.

“Also in that picture, in the tower block was the Rector’s office where Fr Geaghan gave me my first cuts.  In my first week, as a new boy, First Prefect Fr Weaver sent me for those cuts for our hilarious but dangerous stone-throwing contest at break time near the Beit Hall!”