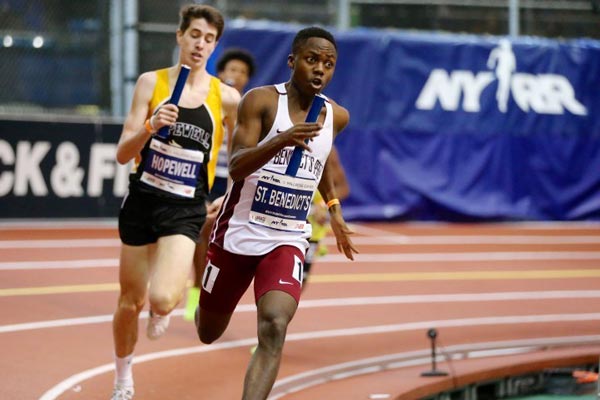 Alfred Chawonza, formerly a St George’s College pupil who is now in his final year of high school at St Benedict in New Jersey, USA, might be about to change that.

The 17-year-old has been on a rapid rise since moving to the US two years ago. Last month, Chawonza ran the fastest 800m indoor time on the US High School track and field circuit this year after clocking 1:50,57s to win the 800m at the Boston University Last Chance meet on February 24.

What makes Chawonza’s recent success even more remarkable is the fact that he battled injuries and minor hamstring pulls in his first two seasons at St Benedict.

“Well, it feels good to be ranked number one in the 800m, but more satisfying to be running fast times and being back to the top following all the injuries I’ve been through the past two years. And it’s also hard trying to maintain that, but I’ve been working hard and it’s paying off,” Chawonza told The Sports Hub in an interview last week.

Due to his success, Chawonza was a major target of some of the leading universities in the US, before he opted to join Texas Tech, whose track and field programme was last year named the best in the US.

He believes the move will provide him with the perfect platform to further develop his athletics career due to the friendly weather in the southern part of the US while also focusing on his academics.

“I wanted to go to the southern part of the country because I am not a fan of the snow. It snows a lot where I am and it messes with my training, but the south is warm almost all year round, similar to home. Texas Tech is also one of the best business schools in the country and so it was attractive from an education standpoint because I want to be a business major. Most importantly, they have one of the best mid-distance programmes in the country if not the best, so that was for me the deciding factor,” Chawonza said.

While it might be still early days in Chawonza’s young career, National Athletics Association of Zimbabwe (Naaz) director-in-charge of junior development Silas Muringani has seen enough from the young athlete to be convinced that he could be the next star of Zimbabwean athletics.

“I believe if Alfred is given proper guidance and support, he can be the next diamond of Zimbabwean athletics. The times he has been posting during the indoor season in the US have been phenomenal, especially if you consider that he is still a teenager and the fact that the season is just starting and he was competing in indoor events. I have no doubt that if he continues to work hard, it’s just a matter of time before he eclipses some of the country’s longstanding records,” Muringani said.

However, Chawonza might have been lost to athletics altogether before his career even started. Before deciding to concentrate on track and field, he was an accomplished rugby player, where he was lined up for the national Under-14 side as a flanker or centre.

“I was actually on a rugby scholarship at St George’s College, and that was my favourite sport and I still like it. But there was a point where my track schedule for the national team and rugby schedule (school and country) were interfering with each other. My rector and my headmaster back at St George’s sat down with me and advised me to choose one. . .they believed that I had immerse talent in athletics and it would take me places. They discouraged me from doing rugby because of injuries. But they said they would support me in whatever decision I made, but ultimately I chose athletics,” he said.

The decision proved a masterstroke as Chawonza went on to win two gold medals in the 800m and 1 500m races at the 2015 Cossasa Games in Lesotho. A year later at the same competition in Namibia, he did not take part in the 800m, but was part of the 4×400 relay team that won a gold medal.

Although he was only 16 at the time, Chawonza was part of the Zimbabwe team at the Southern Region Under-20 Track and Field Championships where he won a bronze medal in the 800m with an impressive time of 1:49:67.

“With that time, I was able to get a place in the States,” said Chawonza.

“My family thought it best to move here in terms of college opportunities and exposure. I wanted to go to a good college, where I could continue with my academics and have an opportunity to run at another level,” Chawonza said.

After having his first feel of international athletics at the 2017 IAAF World U18 Championships in Kenya, Chawonza hopes his time will improve.

“The World Youth Championships was a tough competition. But I’ve tasted the competition and I definitely want more when I become a senior. But for now I’m just looking forward to running some fast times and hopefully get called up for international competitions by Zimbabwe,” he said