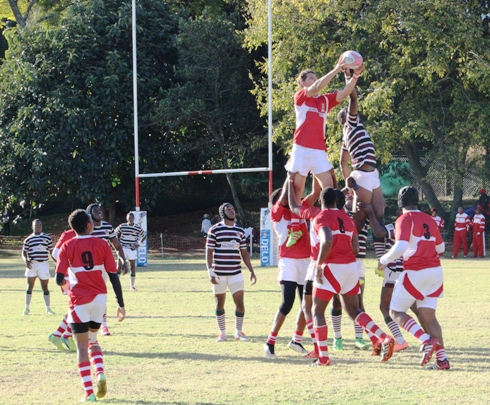 The St. George’s College teams descended on Prince Edward for the Reunion Day Fixtures on Friday 1 and Saturday 2 July 2016.

Our 1st XV really put on a fine display of controlled, exciting rugby where the team stepped up a couple of gears and played with heart and passion. Led by Captain T Muchena who had another storming game at number eight he initiated some great moves where T Bunu featured more prominently and everyone rallied around them. The pivotal area of fly-half/scrum-half was very effective and R Biyason was on song with some good tactical and relieving kicks and his distribution was much better. P.E were always dangerous on the counter attack and were quick to punish us with errors. J Tafireyi had a try saving tackle early on and injured himself in the tackle so badly he had to leave the field. C Rensburg also injured himself but managed to continue and eventually after some relentless pressure and possession we were awarded two penalties and from our own line-out we mauled the ball over for a good try from A-N Makanda to take the lead deservedly with 10 minutes to go in the first half. A defensive error at centre again let P.E break up the middle of the field and although T Bunu managed to stop the attack at full back P.E won their scrum, went blind and scored in the corner to level just before half time. T Bunu had another blistering run but P.E were always ready to block him and then counter.

In the second half we started badly with a dropped catch from the P.E kick-off who then took advantage from their counter attack to score again out-wide to go 10-5 up. We had another serious injury to A-N Makanda, and had to replace him. Our scrum became a bit unstable and that was all P.E needed to take advantage of more possession and although we had some close calls especially when T Bunu went down the touch-line and barged over a few P.E defenders and was called out by the A.R! P.E immediately replied from deep in their half and scored against the run of play to go 17-5 up. The doors then opened and we lost our momentum totally and allowed P.E to play their expansive running game to add another converted try and then near the end an unconverted try to finally win 29-5. There were a few P.E interceptions that were called back for an earlier infringement which saved us from a further try being allowed (with 5 new Caps T Mtara S Mandoza, C Maniwa, S Njazi and L Nhidza). This was a spirited performance by a team that put the horrors of the Peterhouse match the week before behind them. However we cannot cope with the injuries sustained to four of our senior players. It was also good to see most players responding to stepping up their game. Well played to P.E who are always so quick to counter and take their chances.