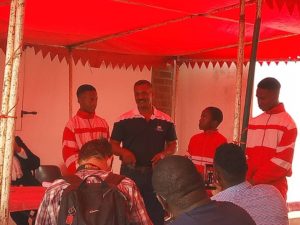 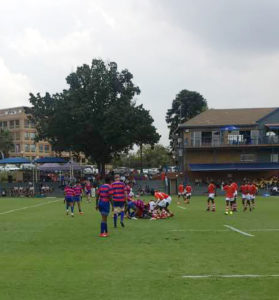 After a fantastic send-off and kit presentation, accompanied by national coach (?) and guest speaker Peter De Villiers, the College’s U16 rugby team was excited about and prepared for their imminent tour of South Africa.

On arrival in Johannesburg, there was a clear sense that St George’s were regarded as the underdogs, but this worked in our favour as we were able to surprise teams with our agility, speed and ball skills on attack. These attributes helped us overcome our first opponents, the hosts, St. Benedict’s College, in a 25-minute match.

The second of our shortened games was under lights against St. Albans.  Despite the rain that beat down, we managed to comfortably beat them through a well-worked kicking game. Morale and belief were at an all-time high going into our two full 50-minute games, where our concentration and fitness were going to be put to the test.

Confronted by a very “big” Cornwall Hill College outfit, our set piece was put under pressure but the team’s mobility allowed our backs to run freely at times, which helped us win our first full game.

Finally, we played Trinity College, again in cold, wet conditions which meant that the ball was very slippery.  However, clinical play allowed us to counter-attack with good interplay between the backs and the forwards, which lead to vital points that carried us over the line.

I have never seen such firm self-belief, energy and team spirit from a team before, and this lead to our overall success.  Even those times when we displayed little defence on the field, we were still able to put the opposition under pressure and succeed.